The First Thanksgiving – A Festival of Food in 1621

The First Thanksgiving – A Festival of Food in 1621

It took the original colonists sixty-six brutal days to cross the Atlantic back in 1620, finally dropping anchor near the tip of Cape Cod. One month later, the Mayflower crossed Massachusetts Bay and settlers began establishing the first village of Plymouth. 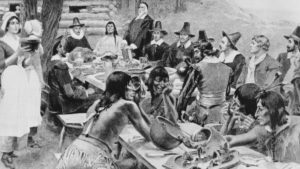 Through that first brutal winter, most of the colonists lived aboard the Mayflower, suffering from exposure as well as many other contagious diseases and killing off half of the ship’s complement. In the spring, the remaining settlers moved ashore and were approached by an Abenaki Indian who surprisingly, greeted them in English. A few days later, they returned with another Native American named Squanto, a member of the Patuxet tribe, who had been kidnapped by an English captain and sold into slavery; Squanto later escaped to London and returned to his homeland on an expedition. The Pilgrims, suffering from disease and malnutrition, were educated by Squanto on how to cultivate corn, extract sap from trees and catch fish in local rivers. Squanto taught them which plants were safe for consumption and which were poisonous. He also helped the Pilgrims forge an alliance with the local Wampanoag tribe with which would they would remain allies for more than 50 years. Sadly, it remains the sole example of harmony between the colonists and Native Americans. 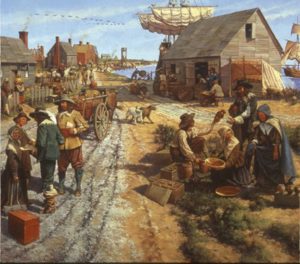 Following a successful harvest in November of 1621, Governor William Bradford organized a celebratory feast and invited a group of the colony’s new Native American allies to join them. The festival of food lasted three days and became known as America’s first “Thanksgiving.” Ironically, the Pilgrims were completely out of sugar by this time, so they had no pies, cakes or other delicious confections we so often associate with Thanksgiving.

That’s right, not even a pumpkin pie.

Turkey Did Not Make it to the First Thanksgiving

The Pilgrims had no oven to bake a turkey, so a group of men were sent on a “fowling” mission returning with five deer which were then prepared with traditional Native American spices and methods.

The second Thanksgiving was held in 1623 to celebrate the end of a long drought. It wouldn’t be until 1789 that George Washington would finally declare this day a national holiday. Thanksgiving wasn’t officially added to the calendar at that time, each state celebrated on its own chosen date.

For thirty-six years, author Sarah Josepha Hale (author of “Mary Had a Little Lamb”) pleaded with governors, senators, and presidents to establish a nationally-recognized holiday. Finally, in 1863, Abraham Lincoln asked the nation to ask God to “commend to his tender care all those who have become widows, orphans, mourners or sufferers in the lamentable civil strife” and agreed to schedule Thanksgiving for the final Thursday in November to “heal the wounds of the nation” following the Civil War.

Later, Franklin D. Roosevelt moved the holiday back a week in an attempt to help retailers during the Depression in 1936. This was met with strong opposition – so Roosevelt reluctantly changed it back to the fourth Thursday of November.

Thanksgiving by any other name…

It may surprise you to know that several other countries also celebrate a Thanksgiving:

Canada celebrates its Thanksgiving on the second Monday in October to give thanks for the close of the harvest season. 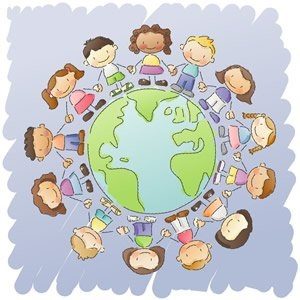 Liberia celebrates Thanksgiving on the first Thursday of November since in 1820 it was colonized by a group of free African Americans (formerly slaves).

Norfolk Island celebrates Thanksgiving on the last Wednesday in November, having been established by visiting American whaling ships.

The people of the Netherlands celebrate the American holiday on the same day as the United States, as many of the Pilgrims were originally from the Netherlands.

Grenada, a Carribean island in the West Indies, celebrates Thanksgiving on October 25th. Their holiday actually marks the anniversary of the U.S.-led invasion of the island in 1983 in response to the execution of Grenadian Prime Minister Maurice Bishop.