Michael lay with his head on the soft, down pillow as he watched his wife’s chest. The rhythmic rise and fall of her bosom under the old, soft, cotton nightgown. This ancient familiar warmth had given him the strength to start his day for the last sixty-six years. His eyes moved down toward her legs which were covered under the white knitted blanket. Her old hands with skin now so thin that the form of every vein, ligament, and bone shown through them as they lay upon the blanket. He could hear birds outside the open window but did not want to look toward it, did not want to take his eyes from the view before him. Slowly, he turned his head upward and looked at her face, asleep, so peaceful. 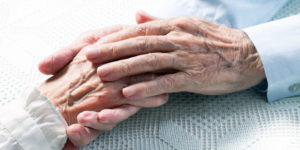 Her white hair flowed down and around the edges of her face, framing it in ethereal beauty. Her flawless skin made her appear twenty years younger, despite the wrinkles around her eyes and mouth. When she smiled the wrinkles disappeared and the room was filled with light.

He thought back to last week, as they sat at dinner when she smiled at him before she passed out and pain struck him.

A moment ago it was her birthday as she blew out the candles with the number 88 on the cake.

A moment before that the boat ride on Lake Erie with their grandson and two great-grandchildren. Michael held Beth’s hand and sat as the wind blew their white hair, filled with the smell of the lake.

A moment before that, their fiftieth anniversary as they sat at the restaurant, surrounded by friends and family. So many people they had touched over their years together, standing tall despite the odds.

Farther back, in the shade of the trees, as they walked through the park, pushing their grandson in his stroller, autumn freshly fallen and the leaves blowing in small vortices all around them.

Farther back, the nightmare he had awoken to, his daughter, Jennie dying in a car accident as she drove along the coast. But it wasn’t a dream, it was a memory. Beth had held him as he cried and in turn, he had held her as she cried, her sobs shaking his shoulder.

Farther back, their grandson had come into the world and Beth sat in the hospital room chair holding the newborn baby boy, his soft perfect skin and an entire life before him.

Farther back, Jennie was walking down the aisle and Michael, as nervous as the day that he lifted his own bride’s veil years ago – gave Jennie’s hand to her new husband Robert.

Farther back, Jennie introduced Robert to her mother and father on the front porch as Michael stood with his shotgun in hand, always the dramatic flair. Robert had taken one look at the shotgun and stepped back. Beth then grabbed the gun from Michael and pumped the gun, opening the chamber and showing it was not loaded but merely a scare tactic.

Farther back, Jennie handed a hand-made ornament that she had created for her father in second grade, her long golden hair cascading down her shoulders as she smiled with great anticipation while he opened the tissue wrapped ornament.

Farther back, Beth handed Michael their newborn daughter. He took the baby and gently cradling it in his arms, feeling alien to the idea of holding a child. “She’s the most beautiful thing I’ve ever seen.” He had said. “Next to you of course.” He had quickly added.

Farther back, Michael adjusted his bowtie. So nervous his hands were shaking. He had been madly in love with Beth since he was 17 and now here he stood in the room adjacent to the sanctuary, about to take her hand in marriage. “Dear God, please help me to follow your guidance. Help me to protect and love her for the rest of my life.”
At the altar, he had lifted her veil and kissed her. Beth had whispered in his ear, “Will you love me for the rest of my life?” to which he had replied, “For all of your life and a day, my love.”

The warm bed clothes wrapped Michael in a cocoon of warmth yet a chill ran up his spine. He reached his hand out and touched Beth’s face. She opened her bright blue eyes and looked at him, a flash of sorrow in her eyes as she felt her body failing her. Beth looked into her husband’s eyes, “It’s time.”  She said.

Michael nodded and pet her hair. “Shh, I know. It’s okay.” He whispered.

“Will you love me for the rest of my life?” she asked, as she had asked thousands of times over their years together. He shook his head gently as a single tear streamed down his face and his lips trembled.

“No. I’ll love you for the rest of mine, and a day.” He replied and wrapped his arms around her as she took her last breath.

Michael lay there for an hour, unable to move, just holding Beth in his arms, sobbing.