Guns and Children — Don’t Be Ignorant

Guns and Children — Don’t Be Ignorant

Last month I wrote an article discussing guns, gun bans and the concept that business bans or restrictions on guns offer a safe haven for killers in &ldquo;Gun Bans a Safe Haven for Killers&rdquo;.

During my research and discussion for this article, questions regarding children and guns came up and it was a topic I badly wanted to discuss, but did not feel that was the appropriate article to go into any detail. 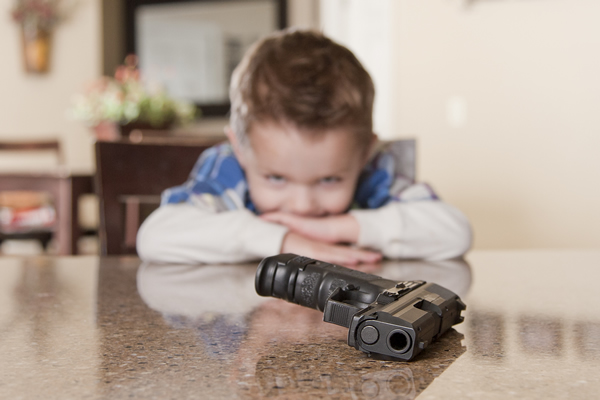 I am a father to young children and also an educator of parents with a teaching focus of protecting children online. My compassion for children runs deep and having been raised around guns and being taught the dangers of guns at a young age, I believe that it’s critical to educate children on gun safety.

Gun ownership is not just a right under the Constitution, it is also a responsibility. It&rsquo;s our charge to ensure that those who own guns are taught not only the safety necessary to protect themselves, but also the knowledge of how to make certain children understand the realities and dangers of guns.

As a child, I was never allowed to touch a gun unless my parents were with me. I knew exactly where they were kept. I even knew where the ammo was stored, but not once did I ever think of touching them. I knew guns posed a danger. I realized what guns were capable of and that they could mean the difference between life and death–in good ways (protecting yourself) and bad (killing another accidentally). My father would even mention that we shouldn’t even point toy guns at other children, in keeping with the consistency of his “gun” safety teaching.

When I did handle guns, my father had three strict rules:

My father has taught children for years about gun safety, explaining the power that accompanies holding a gun, the inherent dangers and the fact that guns should only be held by those trained to wield them.

Few things upset me as much as hearing people say, &ldquo;Guns kill people.&rdquo; They might as well step out into a crowd with a megaphone and announce, &ldquo;Hello. I&rsquo;m ignorant.&rdquo;

Not once in my life have I ever seen or heard of a gun jumping off a table, aiming itself at a person and tripping its own hammer.

Every single one of these is both a tool and a weapon and should be respected as such. But no single weapon kills a person unless the person behind that weapon either has the intent to kill or is ignorant. Sadly, I do believe that a greater number of fatal gun accidents are due to ignorance than due to intent. Ignorance is our number one problem when it comes to all weapons–ignorance of how they work, ignorance of how to protect our children from their inherent dangers, and ignorance of use and purpose.

Resist the urge to be an ignorant parent who dismisses guns entirely in stating, &ldquo;I don&rsquo;t believe in guns&rdquo; or &ldquo;I won&rsquo;t allow my child near guns.&rdquo; The reality is, your child will end up around guns someday. The right to own a gun is a constitutional right and isn&rsquo;t going away. That being a given, I encourage you to either educate your children on gun safety or move out of the country.

Please consider the fact that teaching your children to be safe and understand guns doesn&rsquo;t mean that you need to own one or even approve of owning them in general. Your teaching them gun safety does mean that you are a responsible parent. The last thing you want is for your child to be in a gun owner&rsquo;s house with a parent who has refused to teach their own children safe gun practices, thus putting your own child at risk of being injured or killed–only because you were negligent in instructing your child about gun safety.

What can we do to ensure that our children are safe?

Too many people expect the government to make laws and set rules in place that will protect their children and take away the responsibility that they have as an American to educate their own children for.

We are all imperfect. We cannot expect perfect government.

It is our responsibility as parents to create and follow guidelines that will teach our children and make a safer world for them to live in. Ultimately it is we the parents that are responsible for our children, not our government.

Follow these simple rules religiously; what I call the T.A.F.T.T. rules:

Tell your children that you own a gun. Hiding it and not telling them that it&rsquo;s in the house is a recipe for disaster.
Alert an adult if they see a child near or touching a gun and always leave immediately.
Fear guns. Explain the real dangers to your children that guns pose. A strong fear should be put into them (especially young children) regarding guns.
Take your children shooting as they get older (pre-teen and teen). They need to understand the reality of guns and how to properly handle them.
Treat your guns as you would treat your car. Both can save a life or take it away.
Source: Huffington Post