What they don’t tell you is that the students struck first.

“May 4, 1970 was a day that I will never forget,” begins my father, Pete Stadtlander with a story that I have heard so many times growing up. He is beginning to tell his story about the riots and shootings that occurred as he stood in his woodshop class in Van Duesen Hall, which faced the Commons at Kent State University. He has had told me many times over the years how he and several of his friends snuck to his car by the stadium by crawling from under car to under car to avoid State Police locked arm in arm sweeping people into the Commons after the shootings. How he had eventually made it to his car and began driving home to Mantua but while driving through Ravenna had a rock thrown at his window because he had a Kent State sticker on his window. But this time, when I am now almost forty-five, for some reason he chose to go into much more detail than I have ever heard before. 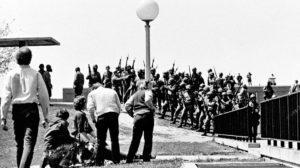 He continued, “I remember working in my advanced woodshop class and at some point, the people outside were louder than our equipment. That’s when we shut it all off and opened the garage door on the Commons.

Let me also point out, that there were a handful of people in thier late twenties that were not what I would call real students. They were people who supposedly took classes but spent most of their time hanging around campus in the cafeterias with people gathered at their tables. They were the ones that were good at leading people to do what they wanted them to and they were never the ones in the middle of the crowds. They always stood at arm’s length letting the kids do the dirty work. 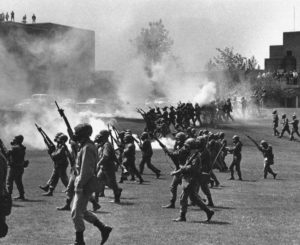 The National Guard had stated earlier ‘No assembly on the commons. No more than a hundred students are allowed to gather in one place.’ after the students had set fire to the ROTC building. Well, there were at least a hundred people out in the commons when we opened that door and they were joined by fifty more, then a hundred, then four hundred and before I knew it there were a couple of thousand students gathering on the grass chanting and yelling as there frequently were during the [Vietnam] war. There were perhaps a thousand National Guardsman and another thousand State Police. That’s when I saw the kids coming in from different points on the commons, hundreds, then on the other end, I saw several thousand students flatten a huge hurricane fence at once. They toppled it as if it were nothing but paper and marched across it to join the main body of students already on the Commons. It was scary as hell to watch.

The media will tell you how the National Guard opened fire on the students, how they couldn’t control the situation and chose instead to shoot a bunch of kids.” My father paused, and this was when the story begins to take on a different color than it ever had before, “What they don’t tell you is that the students struck first. I stood there watching as students that had climbed to the top of several of the dorms began to hurl concrete blocks from the tops of the Stouffer Hall and Taylor Hall [dorms] at the Guardsman below. I even saw them throwing railroad ties off the top of the building! Railroad ties! Can you imagine that? Do you know how much a railroad tie weighs?”

“I’m not sure.” I respond, shocked at the story.

“Two hundred pounds. Imagine that you are tasked with protecting the university from riots, you are just kids yourself trying to serve your country and you see bricks and railroad ties coming at you from above. Tell me that wouldn’t freak you out and piss you off? ” he took a breath, “These men were going to be slaughtered. They opened fire not to control the crowd but in self-defense. It could not have been more clear.

Yet the media twisted it and they ended up indicting eight of the Guardsman. They all were acquitted, but I couldn’t believe that they even charged them with this. It was absurd.

One of the Guardsman [Ralph Zoller] that was indicted was a very friend of mine from Mantua. The Zollers owned a pharmacy in Mantua. His brother [Bob Jr.] was hit with a mortar in Vietnam shortly after and brought back in a plastic bag. His name is on the wall. That family endured far more than any family should. It shattered them.

History is in the eye of the beholder. I’m not recounting things I read about or heard about. I’m just telling you what I saw with my eyes on that day back in 1970.”

Facebook Comments
The Story Portal Podcast
Share
Your Secrets and Being Authentic to Yourself
Game of Thrones – The Bells: An Analysis of Episode 5, Season 8